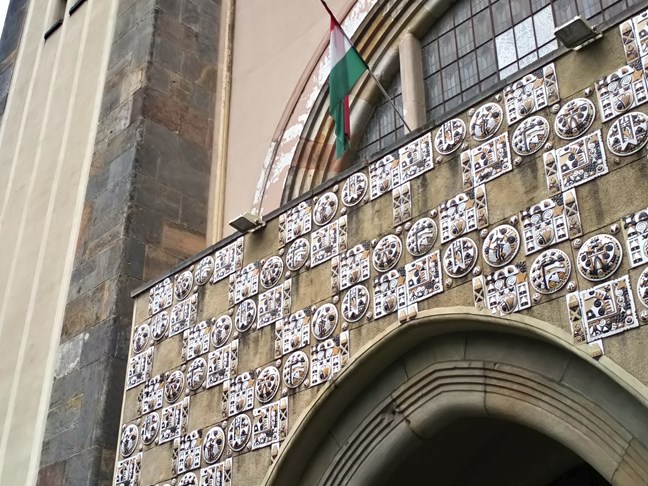 Image: Zsolnay tiles are a special feature of the Fasori Reformed Church

The Decorative Arts Society’s visit to Hungary in May 2018 demonstrated the diverse aesthetic and theoretical interests of Hungarian artists and makers from the 19th to early 20th centuries. One particular highlight was the Fasori Reformed Church (1911-13), by architect Aladá Àrkay, a combination of Hungarian and Finnish design. Nordic pines figure in the Zsolnay porcelain tiling whilst Miksa Róth’s stained glass contains woodland motifs, mushrooms and fauna. Despite the apparent muddle of stencilling, wood carving, metalwork and tiling, the church is an effective gesamtkunstwerk, a calm synthesis of varying texture and material. Àrkay’s later relationship to the Bauhaus is apparent in the modern forms and reduced colour palette.

An equally intriguing site was the Gödöllő Artists’ Colony. Artist Aladár Körösföi-Kriesch bought a house in Gödöllő in 1901, establishing a weaving workshop in 1905 and expanding to include artists interested in the wider field of applied arts. The work they produced included furniture, typography, designs for interiors, stained glass and painting. It followed in the footsteps of the Nazarenes, Tolstoy, and the Arts and Crafts Movement, with similarly utopian aims concerning enriching and exulting daily life through creative production.

Sándor Nagy, Laura Kriesch, Zoltán Remsey and others forged relationships with fellow artists across Europe and the colony’s work became known in the world fairs of Paris (1900), St. Louis (1905), and Milan (1906). Drawing upon Greek and Roman mythology, alongside Hungarian history and folklore, the artists’ sources were eclectic. Their heritage lives on through the present-day Gödöllő Applied Arts Workshop.

These sites are just two of many fascinating sites and collections that were visited, and about which so much more could be written.